The history of the island Krk reaches back into the prehistorical period. Numerous nations, indigenous inhabitants and strangers shaped its history, starting with the Liburni, the Romans, the Slavs, the Franks, the Venetians, the Habsburgs, all until the modern age. The city was founded on ancient foundations (Platea Antiqua, Thermae, mosaic in the tavern Mate, Temple of Venus and the city walls), which through hundreds of years of changes obtained a cover of medieval walls and a new city infrastructure still extending along the regular Roman city raster. The change in the city view was determined by two main features; one purely stylistic, brought by changes in the way of building, which followed European artistic tendencies, while the other came along with the Christianisation and placing importance on sacral architecture around which the city centre formed.

The feature with which the city of Krk entices people is its representative medieval heritage. It emerged during the Venetian domination in this area. This was the age of the Krk princes Frankopan, who managed to remain in Krk owing to their skilful policy towards the Laguna. The Frankopan castle has been preserved almost as it was, in the very heart of the city on the square Kamplin. Kamplin represented the focal point of both the profane and sacral life, as its western side is enclosed by the Krk cathedral and the church of St Kvirin, beautiful examples of Romanesque architecture, with the second being an exception, owing to its two floors. Besides the valuable Romanesque shell, these structures were refined by a rich inventory for centuries, mostly Venetian. Therefore, it is no wonder we can find valuable painting and sculpture works, the works of masters across the sea; paintings by Andrea Vicentino, Paolo Veneziano, Nicola Grassi, or sculptures by the Michelazzi workshop.

The view of the medieval Krk would be impossible without the modest monastic brotherhoods. They found their place near the north city gate Porta Su, around the today’s Glagolitics Square. The Franciscans, the Benedictine monks and nuns and the Poor Clares once lived in this quite prominent place. The Franciscan monastery and the Benedictine nunnery have been preserved and are still in function, while only the church of St Our Lady of Health remained of the former Benedictine monastery and the Poor Clares nunnery was completely ruined. 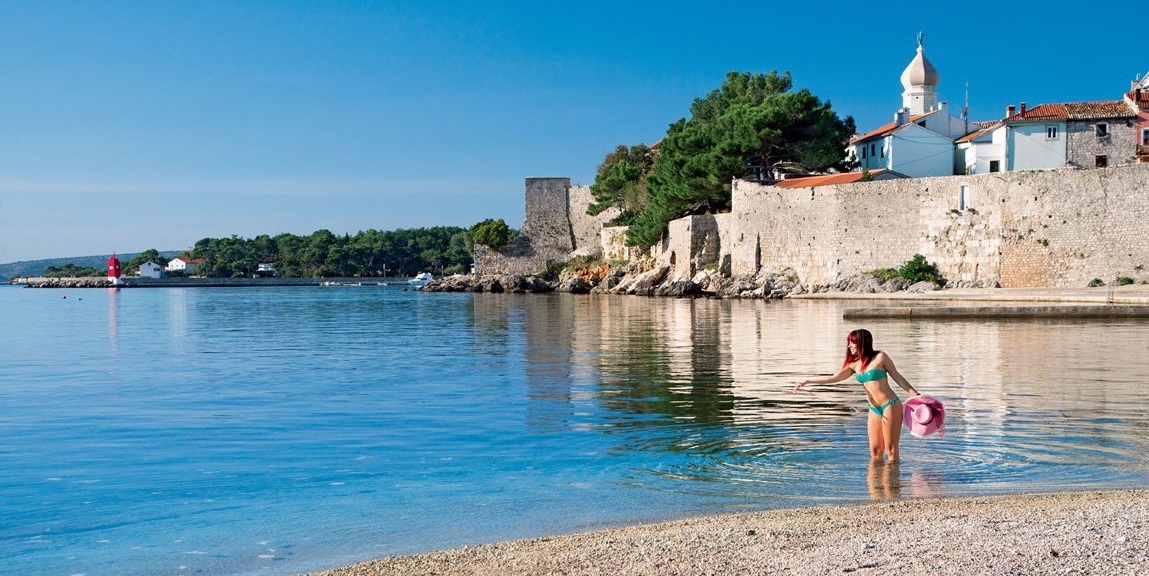 Krk is a popular tourist destination, because of the situation and proximity to Slovenia, southern Germany, Austria, and northern Italy. The sea is clean, very clean! The best supporting evidence for this is offered by six blue flags each year gained by town beaches meeting the high criteria for quality seawater, and associated amenities: sanitary, hospitality, sporting, recreational, and along with a compulsory note that the beaches provide access to the sea for persons with special needs. In the town area of Dražica, there is a beach for dogs, a separate area where dogs can swim and seek relief from the summer heat.

What to visit when staying in Krk

Spend your summer and holidays with us. Inside or from town of Krk you can visit:
The ideal geographical location is an advantage that the island of Krk has well assessed in terms of tourism. We refer to the closeness of the mainland when twenty years ago a bridge was constructed linking Krk with the mainland, making it even more accessible. Good transport links have made the island of Krk a favourite excursion destination, but also rich one-day excursions can be made form the island as well.
- National park Plitvice (Plitvice Lakes National Park is one of the oldest national parks in Southeast Europe and the largest national park in Croatia.)
- National park North Velebit (The Northern Velebit National Park is recognizable by its preserved biodiversity, richness of the natural phenomena and experience of pristine wilderness.)
- daily or half day sailing excursion / Rent a sail boat the summer day is best and nicest when on the seaside. We are not only referring to the beach, but also recommend daily boating excursions to neighbouring islands, to remote beaches, to the open sea where you will feel the salt in the air, on your skin...
- Bicycle riding, when riding a bike during the summer days, it is best to wake early and chose the morning freshness. You can chose for your route on asphalt roads and investigate the hinterland area of the town of Krk, which covering quite a large area, extends along the western area of the island. The degree to which this route is demanding, depends on how fit you are.
- Diving - scuba diving the tranquillity below the sea around the town of Krk offers an unforgettable experience. Be polite and adhere to the rules! Seek out a local diver who will be your host and guide, don’t dive on your own! For information on preparing for your diving excursion can contact the local diving club or the tourist agencies.
- Wakeboard if you want a comfortable and entertaining day, you must visit the Krk Ski lift, one of the newest and most modern lifts in Europe, it is located in the Puntarska cove, only a few kilometres from the town of Krk.

All these are only a step away from apartment Pacifico. We wish you pleasent stay on island Krk!